How to Change the way your Company Sells

The way Buyers “Buy” Products and the Markets that they buy from,
as we know changes, thus the WAY We Sell MUST also change! 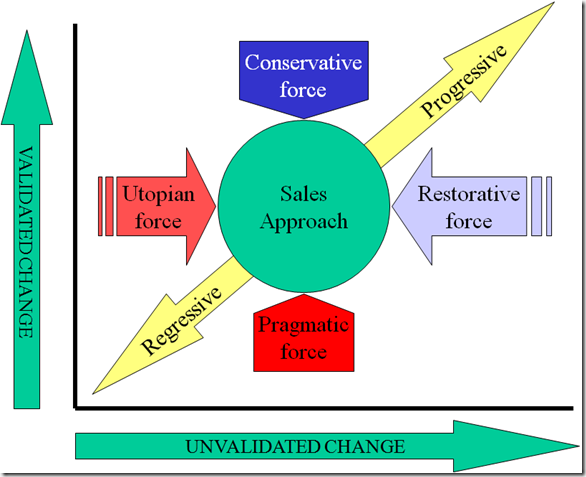 The way a Company actually sells,
and they way individual Salespeople are selling,
is a function of the presence, or absence, of these Four Forces and their relative strengths.

Pragmatic Change is, without any doubt the most successful Sales Change,

but it needs the Conservative ‘restraint’ to prevent it running off-the-rails.

In my MBA Dissertation (1999) I identified FOUR Forces which cause Selling to “Change”,
i.e. from the Orthodox Approach or "Traditional" to the "New" or Unorthodox Approach.

Four forces which cause the Sales Approach to Change:

primarily a “fall” in Sales Performance,
changes in the “Product/Market”,
changes by the “Competition” and “Economic” Change.

But, what was even more interesting was not the CAUSE of change,
but HOW Companies went about “changing” the way they Sell. 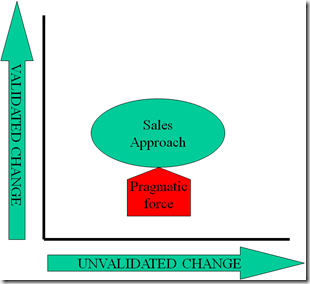 1. Pragmatic Change, based on evidence, what works?
This is akin to Mintzberg’s view of “Emergent” Strategy.

Different Salespeople try different things with different Customers and
a "New Way of Selling" emerges, based on evidence.  It has basic Validation. 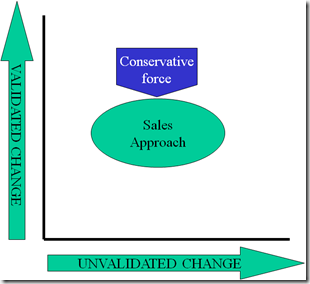 fearing that it won’t work, or is changing Selling too fast.

“Let us just keep going” the Market will shift in our favour.

The old way is best and we have “evidence” that it USED to work,
even if it no longer works!

These first two were “evidence” based, the next two are NOT! 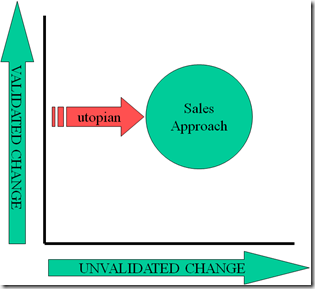 3. Utopian Change to a ‘new, ideal and perfect’ Sales world,
without evidence of its likely effectiveness.
Based on a New Book, a Charismatic Sales Trainer, a ‘Cult’ like approach
where blind faith, hope and trust in a Method, Process, Software, ‘Guru’ or ‘Expert’.
When initial performance reports say it’s NOT working this is explained by
the Change not being fully “accepted”, it then forms into “Disciples” and “Rebels”. 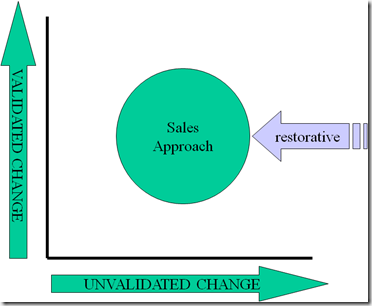 4. Restorative Change is going back to the “Golden Age of Selling”.
This is again NOT evidence based.
It simply requires that the Sales “Techniques” believed to work in the past,
e.g. as used previously in IBM, XEROX, APPLE
or one of the ‘Door to Door’ Sales Companies be re-adopted.
It usually has several Senior Executives sponsoring it
and the introduction of the Sales Trainer who trained them.

Often, you will find both ‘Utopian’ and ‘Restorative’ Change at work
in the same Company, at the same time, as neither is "Evidence" based.

I collected substantial evidence that Evidence Based Selling works.

So, By Accident or by Design?

How are you Changing?

But, sometimes LUCK works too!

There is such a thing as the right product,

‘Orthodox’ Selling will always be the one just before it.

The Key Constructs in this Blog are Copyright ©BMAC Consultants 1999,
and if used should be acknowledged.