Do you think The Challenger Sale methodology is superior?

“Do you think The Challenger Sale methodology is superior?”
[to the IBM Signature Selling Methodology SSM]

The short answer is “yes”.

The longer answer is below!

IBM’s ‘Structured’ Sales Methodology (SSM) gave them significant Competitive Advantage, across multiple Sales Channels. I was consulting with Big Data Storage when we noticed an increase in sales being lost to IBM Distributors in the early 2000’s. We were used to winning the lion’s share in this arena because it was not IBM, not IBM sales, not IBM process. It was a ‘soft’ Market. I did a number of lost business reviews, and we interviewed several job applicants from IBM Distributors.

“Over one-third of IBM’s employees use the IBM Signature Selling Method every day as they develop solutions to client problems. IBM has learned that the professionals who have trained on and use this method sell two to three times more than sales personnel who have not. The method is supported by a portal to allow IBM sales representatives to hone their selling skills and to help with soft-skills development, such as self-image and rapport-building, that is necessary for sales success.

SSM is an elegant methodology which gives IBM and its Sales Channels a common language, allows for rapid scaling and experience sharing. IBM drove it from Marketing, which gave SSM reach and funding.

It is based on the process that Rackham had published several times, most specifically his 1999 “Rethinking the Salesforce”, accurately subtitled as: redefining selling to create and capture Customer value, which he co-authored with John De Vincentis.

Rackham’s Process is described in Chapter seven “Sales Process light in a long dark tunnel”,
where the basis of IBM SSM is covered.

The KEY point is that Sales, unlike other departments, do not have clear boundary “handoffs”, where ‘lean’ improvements can be made.

Rather Sales have an end to end process…….The BUYING Cycle!

And, Sales have to fit with that.

But then you knew that!  Jill, you are the EloQueen.

What you may find interesting is his “Seven Characteristics of a Good Sales Process” page 217.

And, that was what IBM did,
they tested their Sales Process against those seven Characteristics.

From 2003 on in Big Data Storage and Data Services which, compete head to head with IBM, we have used an SSM, underpinned by Consultative Selling Skills based on SPINFAB to successfully compete with IBM and its distributors. If you do not have a SSM, you will lose, a lot, against IBM. In Big Software we underpinned our SSM with Enterprise Selling based on Advanced Selling Skills using VALUE CONSTRUCTION.

When 2008 happened, we had problems all over. Delayed decisions, status quo decisions, losing to the cheapest competitor, and really, really tough Price/Cost negotiations with procurement. Sales were down, margin was down, and profits were down. Yet some Salespeople were doing OK, Revenue Growth, Margins held, and they were earning good Commission!

We audited and assessed the Salesforce. Compared to previous audits there was no skill drop off, but there was substantial activity change. Late entry [or even last minute entry] in the Buying Process was becoming the ‘Norm’. Selling was becoming a matter of weeks of FRANTIC activity followed by months of inactivity in both Strategic accounts and Major accounts. 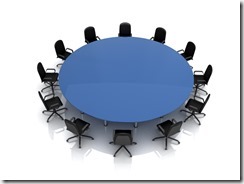 In 2010, in London, I held a breakfast briefing with clients from Big IT, Big Data Storage, Big Telco and Big Software, where I suggested that Relationship Based Selling was NOT working.

It did NOT go down well!
We had a lot of toys thrown out of prams.

Some of these Corporations were betting their shirts that the ‘relationships’ they had been building [for 10 or more years] with their clients in Banking, Government, Industry, Transportation, Energy and Petro-Chem were going to sustain them through the “turbulent” economic climate.

Relationships, did not help.

By 2012, we had the following general situation. 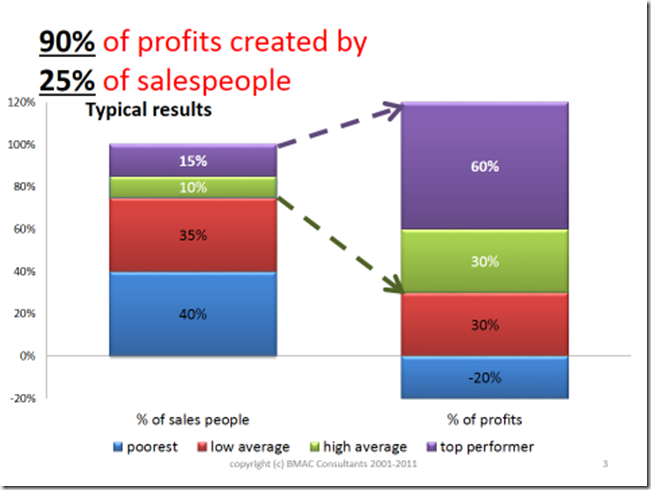 Yes, SIXTY per cent of the Profit contribution
was coming from only 15% of the Salesforce.

This means that losing a Sales Top Performer, a Rock Star,
was really hitting the bottom line.

In several Telecom Clients in 2010-2012
we took the step of cutting the bottom 15% of Salespeople
who were causing a 20% profit contribution LOSS.

We then gave their accounts/territories to the Top 15%.

It had a very positive Profit Contribution response.
(This technique was used by Unisys in the 1970’s) 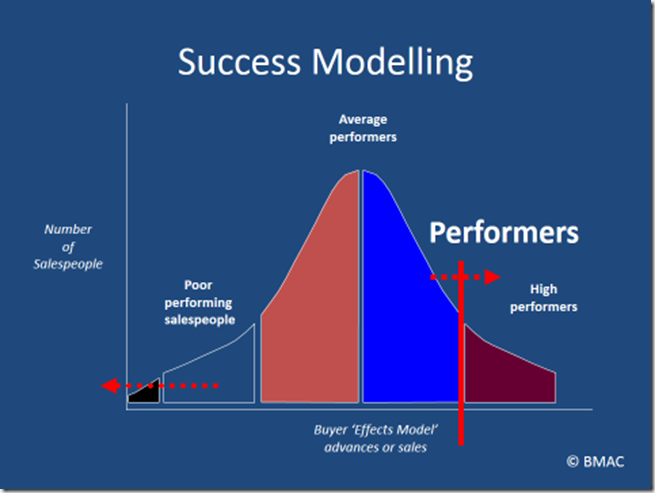 Then, in late 2011, we began hearing about some of the SEC-CEB research,
and the forthcoming Challenger Sale. I read Rackham’s endorsement,
and obtained an early copy of the book.

Jill, I have worked in Evidence Based Selling skills for 30 years, ~
I am NOT taken in by Fads, silver bullets or Hyperbole. I am a Sales Skills Sceptic.
To be even more precise I use an ‘eliminative philosophy’ which simply says:

“If what you tell me is true, then show me the proof and let me TEST it!”

I wrote a Philosophical Criticism about The Challenger Sale in November 2011.

I cautioned, TCS would be misunderstood, and it is now the most misrepresented Sales Methodology around. It has ‘disciples’ who don’t get it, and it has “critics and detractors” who don’t get it, either. I suspect that many who comment for, or against, the book have never read it!  Not understanding the Book, the Research, or the Practice does not seem to stop anybody from commenting about it.

2011, and The Challenger Sale, I already knew that Relationship Selling was NOT working. The startling new Information that the book offered was a sound statistical basis to take a fresh look at Selling,
since the 2008 financial collapse

The emergence of The “Challenger” profile, as distinct from the “Lone Wolf” was really helpful, as both in my research, and is most other research, they were both in the SAME category “Top Performer”. However, now we could measure that one type of ‘top’ performer was in decline, and the other in ascendancy in current Market conditions.

The TCS comparative Statistical Analysis on the ‘Challenger’ out-performing the ‘Relationship Builder’ by more than 10:1 in Complex Selling, was even more than our calculated 7:1.  We had a Validation for what we had perceived in 2010, and had implemented by restructuring the Salesforce population.

Now Jan 2012, the real work began:
“What were the Sales BEHAVIOURS being used by Challengers, and Relationship Builders,
which were defining their success and failure?”

Early research, we had a 15 year database of Sales Behaviours and Sales Performance results to examine, (n=3000 approx.) We had 300 hours of Video to review. And a current base of 350 audited and assessed salespeople to improve behaviourally.

We had several early wins.

Challengers and “Lone Wolf” both used more Suggestions than Proposals unlike Relationship Builders, who used almost exclusively Proposals. This is NOT published in the TCS book and is unique to BMAC Consultants.

What do I mean?

Challengers and the Lone Wolf by using Suggestions
were having a 60% Buyer agreement rate and a 40% disagreement rate.

Relationship Builders by using Proposals
were having a 60% Buyer rejection rate and a 40% agreement rate.

i.e. this behaviour alone was proving to be 50% MORE successful.

The second early win was on Challenger “Insights.”

This was the method we used, very successfully,
to generate insights for Big Software to sell Cloud Based substitutes for Enterprise Software.

We then looked at the Behavioural Practice to deliver the insight content.
Again using the Challenger group and comparing behaviours to Relationship builders.

Challenger exhibited a 60:40 ratio of DISAGREEING to Agreeing

Relationship Builders exhibited a ratio of 40:60 disagreeing to AGREEING

The Impact on the Buyer is noticeably different!

The Buyer would accept the RB’s agreement and reinforce their current approach.

The Challenger’s rational disagreement would cause the Buyer to defend their current approach and enter into Customer Engagement where the Challenger could PROVE their insight.

“Do I think The Challenger Sale methodology is superior?”
[To IBM’s SSM], is:

That they work together!

(NB. it’s very worthwhile to test your “Structure” against Rackham’s Checklist,
just any old “structure” will not do!)

Using the Challenger Approach to initiating Customer Engagement, is superior to most alternatives, especially the Problem Discovery Question based, then Solution offered approaches.

Hence, the furore over “solution selling” is dead discussion.

My research leads me to conclude that Salespeople will NOT learn the ‘behaviours’ of a Challenger just by reading the book, but anyone in Selling can become a successful Challenger by learning the Challenger behaviours and USING them correctly! 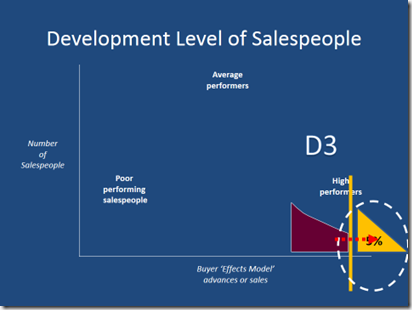 The Golden Triangle, the very Top 5%, Performers in Sales can be developed by careful construction and combination of:

And, all of this fits right on top of current best Practice in Marketing from Companies like Eloqua’s cloud-based marketing automation and revenue performance management software.

Eloqua’s modern marketing cloud delivers best-in-class capabilities to ensure every component of marketing works harder and more efficiently to drive revenue. Having a robust Evidence Based Structured Selling Methodology and an Evidence Based Sales approach, with Validated Sales Behaviours delivers the REVENUE and PROFIT results!